Session with #CraziesAboutBiomedicine about the rights of the children

Session with #CraziesAboutBiomedicine about the rights of the children 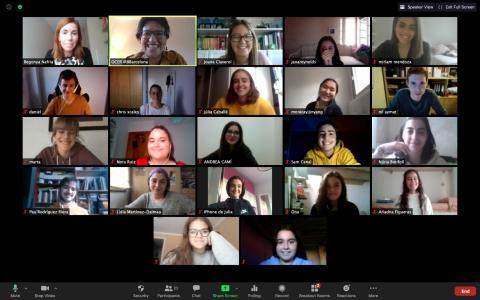 On October 16, we had the pleasure to collaborate with the guys from Crazy About Biomedicine, a group belonging to the IRB (Institute for Research in Biomedicine). We began the session by introducing the objective and the activities that both groups of young people carry out, based on our interest in science and in the improvement of medical activities addressed to the pediatric population.

Our Crazies colleagues are second-year high school students, receiving theoretical-practical training on basic research from IRB experts and researchers for a year.

Then our colleagues Ona and Nora made a presentation about our KIDS group, explaining different projects that we have developed during the last six years, such as the design of a comic to explain in a simple way to children what is a clinical trial.

Once the presentations of both groups were made, a representative of UNICEF from Catalonia, Roger Garcia, gave us a presentation on the rights of children. Many times these are given little visibility and a large part of the population is not aware of them. For this reason, we did an activity in groups. This activity was related to children's rights: we had to choose two rights that we believed were related to the objectives of the Crazies group and the KIDS group, to then design two posts for Instagram explaining the rights reflected on them.

Once separated by groups and having chosen the topics, we say goodbye eager to show the different aspects of the chosen topic in the next session that will be on November 6.

We hope to see you in the next post!