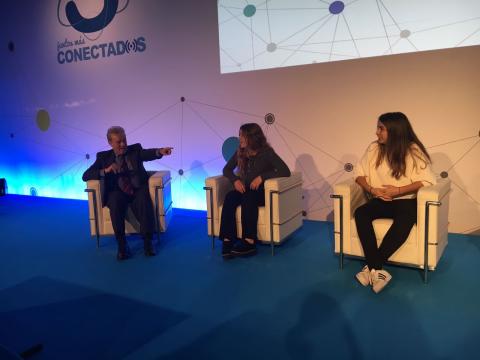 One of the main activities conducted by the Scientific Council of Hospital Sant Joan de Déu de Barcelona is the promotion of the activities in which we participate and that are focused on the improvement of clinical research initiatives for paediatric patients.

Although it was in 2006, in Liverpool (UK), when the first group of young people who advised research centerswas created, in our country KIDS Barcelona is still the only group with these characteristics. For this reason, it is essential to disseminate the objectives and results of the projects in which we participate, and that are essentially focused on clinical trials in paediatrics.

On March 1, the Roche Pharmaceutical Laboratory held its quarterly internal meeting in Benidorm (Alicante), in which nearly 200 employees of the Medical Department participated. In this event, we had the pleasure of being part of an interesting roundtable meeting moderated by the renowned journalist and expert in the field of communication, Mr. Manuel Campo Vidal. The KIDS Barcelona group was represented by two excellent ambassadors, Anna Calpe and Laia Pérez, who together with Begonya Nafría (coordinator of the Scientific Council for teenagers of the Hospital Sant Joan de Déu) were able to explain in person the goals of the group, the activities carried out and the future plans. Regarding the latter issues, the coordination of Sant Joan de Déu Hospital of eYPAGnet (European Young Persons' Advisory Groups Network) stands out, formed as the European network of KIDS groups  that is currently composed by 9 groups and is in the process of being accredited by EnprEMA (European network of pediatric research of the European Medicines Agency).

During the interview, Mr. Manuel Campo Vidal also addressed questions to the ambassadors of KIDS Barcelona, ​​focused on exploring their personal experiences over the two years that the group has been active. For both, to get to know how a hospital works, which besides doing health care research also holds the first positions at a European level in the development of clinical trials, is a privilege they are fully aware that is not available to boys and girls of their own age. Being involved in KIDS Barcelona has also allowed them to define their professional orientation in the future, through choosing medical and law studies (specialty of bioethics) in their university application.

KIDS Barcelona team thanks Roche Spain for the opportunity to explain our projects and the need to work collaboratively with the pharmaceutical industry in order to carry out high quality pediatric clinical trials. We also thank Mr. Manuel Campo Vidal for his moderation, which allowed to present, in a very illustrative way, a project that is based on the training of young people as scientific advisors of our hospital.